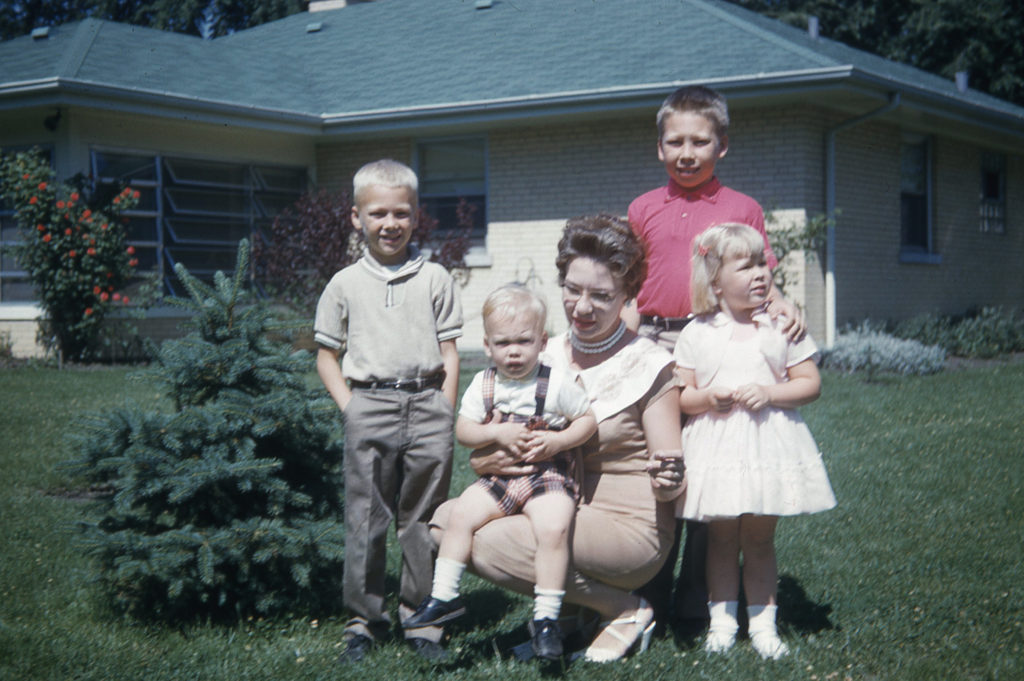 I came upon an old photo recently, circa 1962 of my mother with my three brothers and me; a typical, ordinary family of the time. Never would I have imagined that four of my five family members in the photo were destined to become stomach cancer patients. In 1982, my mom died at age 52, shortly after her stage IV stomach cancer diagnosis. Then 25 years later, in 2007, my oldest brother Greg (age 56) received the same diagnosis. These events led me on a quest for answers: could this stomach cancer be hereditary?

I learned there is a cancer syndrome, sometimes caused by a mutation in the CDH1 gene, called Hereditary Diffuse Gastric Cancer (HDGC). We did not meet genetic testing criteria at that time, but gut instinct pushed us to pursue genetic testing. Yes, this was the culprit.

Our lives were forever changed – this was a family cancer diagnosis, and one likely to continue on for generations to come. My brother was undergoing the challenges of cancer treatment while other family members were going through genetic counseling, testing, prophylactic (preventive) total gastrectomy (PGT), and breast cancer surveillance. It was several years later that the first instance of lobular breast cancer appeared in the family.

I was the first in my family to undergo surgery, followed by my younger brother. Tragically, we lost Greg in February of 2009, 17 months following his diagnosis, and just weeks before his son’s PTG was to take place. By 2015, five family members had undergone successful PGT, proactively eliminating the high risk of developing stomach cancer. In each case, pathology revealed the presence of undetected cancer in our stomachs.

Back in the 80’s there were no resources for families like ours. In 2007 resources were still sorely lacking, not only for diagnosis and treatment, but also for awareness of hereditary risk and support for affected families.

It was in 2008, just three years following my early retirement,  that my passion and purpose in life was revealed to me: to raise awareness about HDGC, to raise funds for HDGC research, and to publish a website (Be Strong Hearted) with information and resources for others who were at risk for or diagnosed with HDGC. Realizing the void in resources, information, and research funding for all types of gastric cancer led me to expand the mission to support all types of stomach cancer, and ultimately to the founding of No Stomach For Cancer, and the mission to build an organization that would continue on independent of me.

I founded No Stomach For Cancer in 2009 and remained actively involved in the organization until turning over the reins in July 2015.

No Stomach For Cancer Founder’s Story

My primary focus during the next three years was my dad and step-mom, enjoying them and helping them through their final years and end of life needs. I continued to keep up with all things related to HDGC. After the passing of my step-mom in August of 2016 and my dad in January 2017 I took some time to rest and restore my health and my spirit. During this time my passion for this cause resurfaced with renewed energy, bringing me Full Circle, and back to my original mission after my family HDGC diagnosis – to raise funds for HDGC research, and to be a reliable source for information and resources for those impacted by HDGC.

Many people, myself included, feel a sense of urgency about the advancement of HDGC research. We have pressing concerns about the quality of life and the futures of our family members, next generations, most especially the children and grandchildren. We need better options for treatment, something better than ineffective surveillance and certainly better than prophylactic total gastrectomy (PGT) to eliminate the risk of diffuse gastric cancer. We need more medical support for the unique needs and challenges that we face, including living long lives without a stomach.

I welcome you to join me in this important mission. Together let us be the catalyst, advancing HDGC research and realizing better health care and quality of life for our loved ones and for HDGC families worldwide.

All the best, Cheers, Kia Kaha, Be Strong Hearted!

The Mission
To support global Hereditary Diffuse Gastric Cancer (HDGC) translational research that leads to improvements in the health and well-being of those affected by HDGC, and to provide relevant, reliable information and resources to help individuals and families understand their risk, make informed decisions, and advocate for themselves.

This will be achieved by:

The Vision
Many HDGC families feel a sense of urgency about the progress of research for the benefit of their children, grandchildren, and generations to come. We look to play a significant role in the rapid advancement of translational research for HDGC that will lead to quality alternative options to Prophylactic Total Gastrectomy (PGT) for patients with CDH1 mutations, more reliable screening and surveillance techniques, and overall improved health care, health, and quality of life for HDGC families worldwide.

Primary Goals
With help from all those who believe in the Mission, together we will accomplish great things. Here are some of these things.

All references on this site to the HDGC Research Endowment Fund and the Fund are referring to one fund that was established by Karen Chelcun Schreiber in August 2020 for the single purpose of funding HDGC translational research in perpetuity at the University of Otago, Centre for Translational Cancer Research (CTCR) in Dunedin, New Zealand.